One of the development branches of RawTherapee called newwavelet contains functionality to add a watermark to a photo using wavelets. Following is a little preview on how this works.

Keep in mind that this is beta functionality and that things (algorithms, interface) can change over time. The wavelet tool is written by Jacques Desmis and it is also him who created this watermark tool.

So I have a 1000×1000 pixel photo and I want a watermark on it. The size of the watermark must be in line with the size of the photo. I use GIMP to make the watermark: new file, 800×200, background white. I write my copyright message using the text tool, font 96px high. I export this as watermark.jpg.

I open this file in RawTherapee, it looks like so.

Then I go to one of the new entries in the wavelet tool, called Merge files and Watermark.

The first thing to be done is to prepare the watermark for insertion into the photo. For that we have to save it using the wavelet tool as a *.mer file (from merge). For Merge type we choose ‘Save L*a*b for Watermark‘. The Preview and Save method changes to Save data and a button appears; click on that to save the watermark to disk.

But before we do this, we can change the appearance of the watermark using the Wavelet settings, on top of the wavelet tool. The watermark is influenced by most of the sliders here. 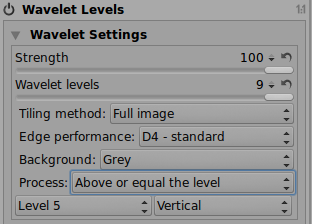 Many different looks are possible.

Now we open the photo to be watermarked. In the wavelet tool (that we activated of course) we load in the Merge files and Watermark section our watermark file. The Preview and save method jumps to Merge image.

And there she is, though rather vague.

Use the vertical and horizontal shift sliders to place the watermark where you want. With the Merge luma curve slider you can change the appearance of the text. It can be made readable on a white background…

… or on a dark background…

… or on a mixed background.

As you can see at 100%, the watermark keeps the characteristics that we created with the wavelet settings before we saved it as a .mer file.

Lastly, you can make the watermark nearly invisible and that’s a good thing because watermarks are often ugly and disturbing!

It is advisable to make several watermarks for several output formats, like web-small, web-big and print for example. Once you have made them, adding a watermark to a photo in RawTherapee is just some clicks away. Merci Jacques! 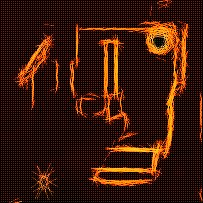